A Hero’s Welcome at St. Declan’s 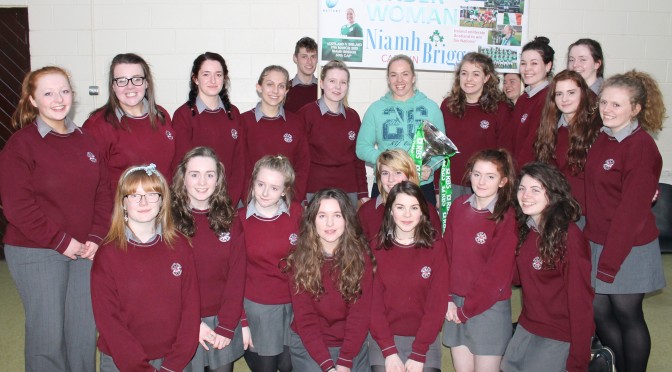 It was amid cheers and song that Niamh Briggs entered St. Declan’s Community College on Tuesday 24th March, carrying the RBS Six Nations Cup which was won by the Irish women’s rugby team.

It was a huge privilege for the students and teachers to meet Niamh and view the cup, which was due back in Dublin the next day!

Mrs. Dunbar congratulated Niamh on behalf of the whole school community. She spoke of her fantastic achievement. She emphasised the hard work and dedication needed to achieve such a goal and she recognised the great role model Niamh has become for all young sports women.

Mr. Murray, PE Teacher also spoke. He put Ireland’s huge achievement into context. He spoke of the bigger populations in the other countries and how Ireland has achieved such greatness with our small population. He spoke about how Niamh doesn’t just dream of success, she works for it! Niamh then spoke; she thanked everyone for their warm welcome. She said she was speechless and that didn’t happen very often! She then talked about the tremendous hard work put in to achieve such a victory, how it involved early morning training, doing her day’s work and more training in the evening. She also emphasised the great team effort involved. She spoke about sticking together even when things weren’t going their way.

Niamh was then presented with a bouquet of flowers. This was presented to her by her brother Shane, who is a PE teacher at the school. Finally before she left there were many selfies taken as the pupils queued to have a photo with their hero! 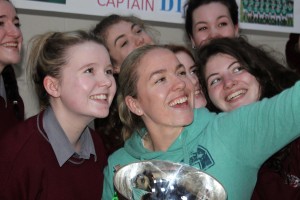